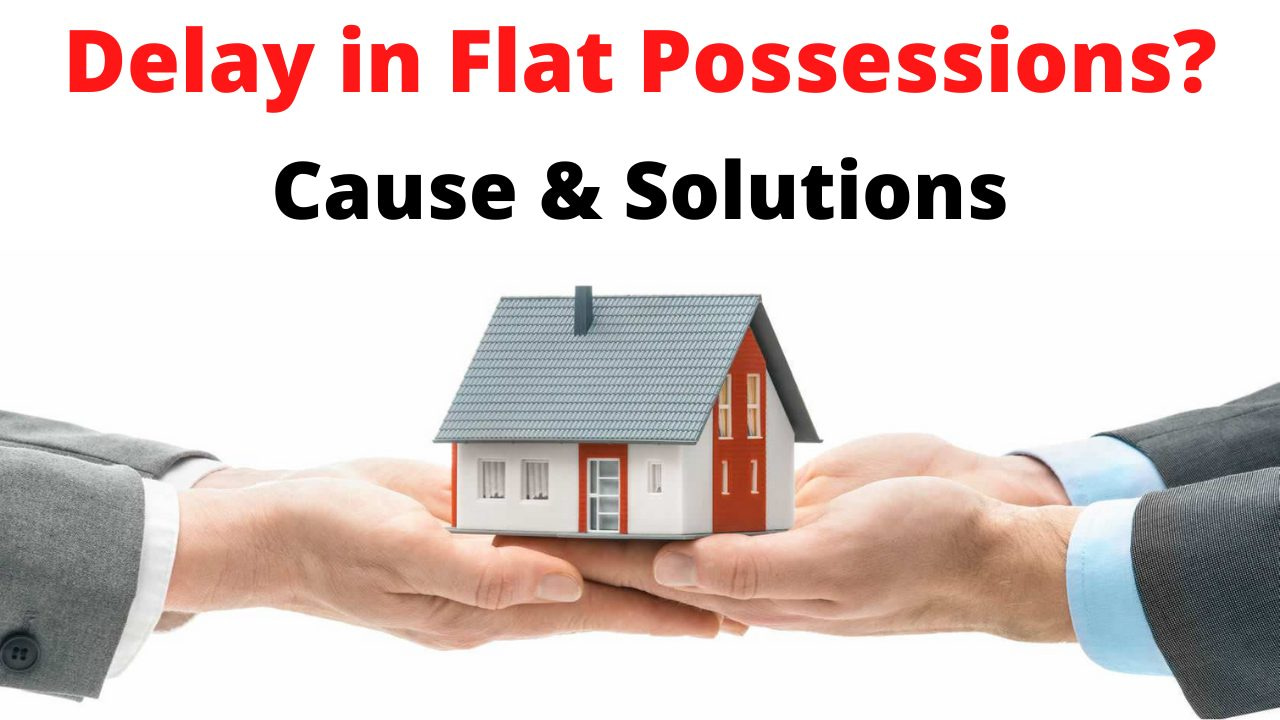 It is often told that “home is not a place, it’s a feeling. “Possession marks the final step in the home-buying process. This is the point where the homebuyer’s dreams get fulfilled as he steps into his dream home. For most of the buyers, property investment remains a one-time activity that takes up a lifetime’s savings.

There are many cases regarding the problem of delayed possessions of flats. Home Buyers can feel not only financial crunch but also loads of stress due to delay in flat possessions. People always dream about buying a house, flat, or property from their hard-earned money but not getting it on time can be really frustrating.

Moreover, imagine the builder ignoring your calls, annoying right? It consumes your mental peace, focus, and energy all at once. Above all, you will not only lose your money in the rental fees and Emi’s but also this anguish can agitate your household and harmony.

It’s hard to keep paying interest to the bank while you are on lease. It is certainly a chronic problem in the sector of real estate.

Particularly, in a typical housing project, builders promise to deliver a project within three and a half year including a grace period of 6 months in Builder Buyer agreement.

As per the estimates, in Delhi NCR alone, more than 3 lakh home buyers are coming up for possession notwithstanding making 90% of their price.

Funding issues: Since, commercial borrowing is exclusive than the retail loans, builders propose home buyers with an alternative of ‘No-Interest’ till possession payment scheme.

In this plan, the builder chooses to forfeit the interest to the bank on buyer’s behalf which is very less as compared to the commercial interest rate

Approval delays: If the construction is not started, perhaps builder has not received construction approvals from municipal authorities. Estimated, there are about 48 approvals a developer requires to take while undertaking any construction.

With the new law, procedures where the approvals will come in 30 days or else, the developers can start the construction by filing an affidavit will help to gain momentum. Moreover, Builder needs an occupancy certificate and completion certificate after he had completed the construction. Without CC and OC he cannot hand over the possession.

Market situation:  A normal procedure is followed by the real estate developers. It includes an investment of money for buying land approval fees, finalizing the design and development plan of the project in order to maximize their returns. In order to raise total capital, builders intend to sell 20% of the total stock.

In current situation as the market is slow, it’s hard for builders to raise the total capital sum to start the construction work. This leads in delay of possessions.

Developer’s negligence: Most often develops delays deliberately. Though few developers’ heaves a authentic reasons for the delay in delivery, there are many real estate builders who have a pitiable sloppy interest in the completion of the project as they don’t want to spend from their own capital due to which the project keeps on suffering.

In order to maximize their capitals builders, divert money from projects to buy property for future projects. Eventually when market falls, the whole project and cash flow suffers. In some cases, builders intend to sell at higher rates in order to make windfall gains.

Also, manpower delay, delay in getting raw material, cement and steel procurement are some of the major factors that put in to the delay caused in handling over the possession to the home buyers.

Solution to the problem:

Precautions to be taken by a prospective buyer

The title of the Vendor to the property must be obvious and viable. The buyer must investigate the title report for the past few years.

Civil Court:  In a situation where the builder commits breach of his obligations, you have given the right to approach a civil court for relief. There are many laws such as the Maharashtra Ownership Flats Act or the Development Control Rules under which the case can be filed before a Civil Court for damages for refund of amount and interest on the said amount.

In other words, the builder is legally responsible to refund the buyer’s money with interest if he is incapable to justify delay in handing over possession of flats.

Consumer form: The Consumer Protection Act, 1986 is the Act which seeks to endow with better protection of the interests of consumer. It provides remedies to a consumer against underprovided services. When a land is agreed or urbanized by a constitutional authority or it constructs a house for the benefit of a common man, it is as such, “service” as by a builder or contractor.

When the tenure of the property is not delivered within predetermined period, the delay so caused is denial of “service”. In such situation, consumer have right to file a case in the consumer dispute redressal commission at three levels – district, state and national level. The District Forum is at the lowest level. The District Forums are established in each District where a value of claim is less than 20 lakhs. The State Commission is established in each state where value of claim exceeds rupees twenty lakhs but does not exceed rupees one crore.

Whereas, The National Commission has jurisdiction to handle claims of more than 1 Crore. A consumer can file a complaint in the consumer forum against the builder. The complaint must be filed within two years from the date of the dispute.

Competition commission of India: The Competition Act, 2002 was enacted to put off practices having adverse effect on competition, to prohibit use of dominance and to protect the interests of the consumers. A flat consumer can file a complaint against the inequitable practices of the builder before the Competition Commission of India which has been empowered to examine anti-competitive practices and inflict severe penalties on the offenders.

The disciplinary measures given under the Act will have a disincentive effect on the real estate industry and help in promoting a fair competition in the market. For instance, Competition Commission of India obligate a penalty of Rs. 630 crores on Delhi based realtor DLF while holding that it had indulged in unfair practice and market dominance.

Criminal court: In cases where the builders make bogus promises to the flat purchasers and do not act in accordance with their legal obligations, the buyer has an option to file a criminal case in a Criminal Court against the builder all along with the consumer complaint in consumer forum.

Home buyer can also file a criminal case under the provisions of the Indian Penal Code, 1860 for cheating, breach of contract, not responding the accusation and delivery of poor-quality construction. You can send a legal notice to the builder.

If the builder does not respond to the notice, file a police complaint and then file a criminal complaint before the Metropolitan Magistrate. You should point out all irregularities committed by the builder in your complaints.

Today, the amplified demand of the residential and commercial property has given birth to a number of builders and developers who offers or promise special features to attract prospective buyers.

First, they will promise you and once they get all the money, they will stop responding to your queries. This has led to a long ending fight between the buyers and builders with respect to the unfair practices used by the builders and the delay in handling over the possession to the buyers in which the ultimate sufferer is the buyer who suffers mentally as well as financially.

There cannot be any justification against the delay caused by the builder once they have promised the buyer and taken their money on the excuse of their own promises.

As a consumer, we must know our rights and way to seek justice (in case). We must be preventive and cautious from the very beginning to avoid such situations. If you are stuck then you should account for legal actions against the builders.

For more articles, don’t forget to visit our site:  http://propertyround.com

Real estate industry: Spiraling in use of technology after Corona virus outbreak