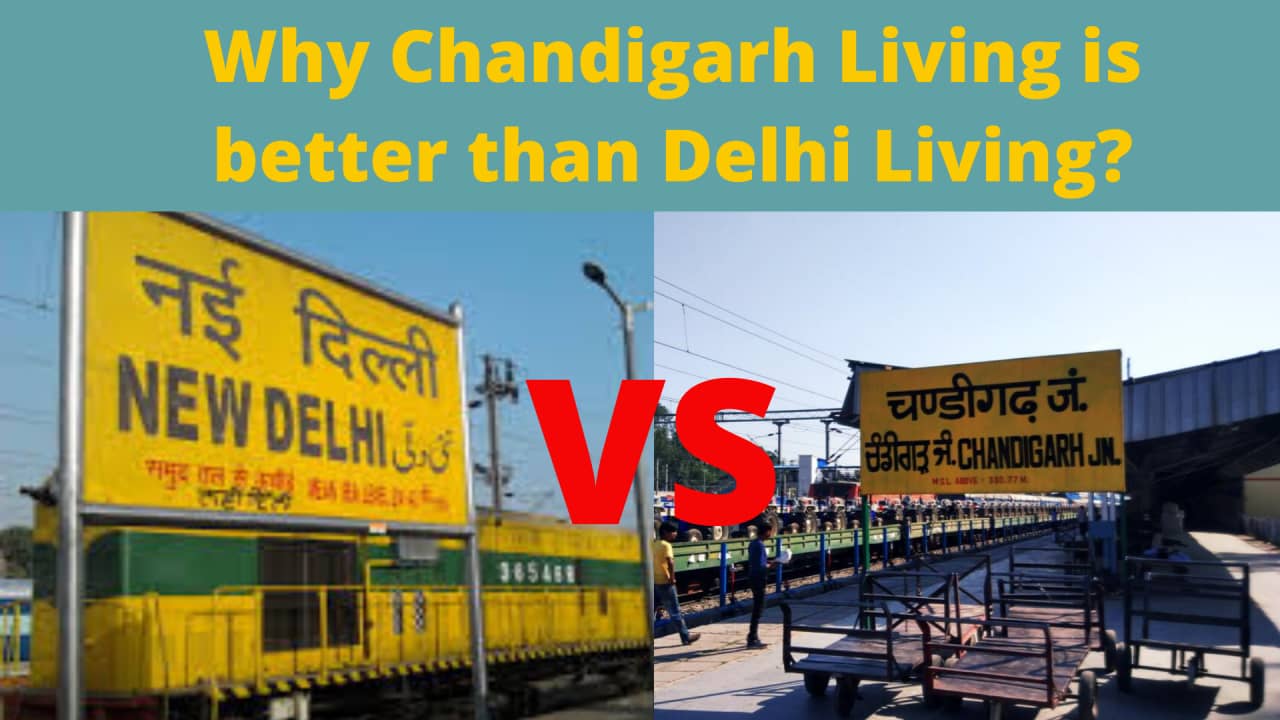 It is highly seen that there’s a lot of movement from metro cities i.e Delhi to Chandigarh.  Given that the opportunity you have in both cities is comparable, you should certainly prefer Chandigarh. Here we are going to discuss some facts about the cities and the reasons for these movements. The capital city has its fan following, who loves it for its wide spaces, organized traffic, good infrastructure, connectivity, beautiful monuments, and mostly for the high-paying and diverse job opportunities. Long termed the pensioner’s paradise, India’s first planned city and capital of both Punjab and Haryana, is idyllic for the jet-setting millennial as well. Along with its satellite towns of Mohali (Punjab) and Panchkula (Haryana), it offers good infrastructure, some of the best in the country.

Reasons why people are moving out of Delhi to Chandigarh?

Cost of living: You would need around 103,868.31₹ in Delhi to maintain the same standard of life that you can have with 99,000.00₹ in Chandigarh (assuming you rent in both cities). This calculation uses our Cost of Living Plus Rent Index to compare cost of living. This assumes net earnings (after income tax). You can change the amount in this calculation.

Below is the average cost of living between 2 cities-

This concludes that Chandigarh is 13 to 14% cheaper than Delhi.

Other factors may include increasing pollution, increasing crime in Delhi whereas increasing job potentials, life safety and peaceful living in Chandigarh. There are other serial offenders that give Delhi a bad name and, its people, high stress levels: ‘severe’ air pollution leading to chronic health problems, high cost of living, rising aggression on roads, safety concerns for women and a soaring crime rate.

Chandigarh is a well planned, greenest and second cleanest city in India (after Mysore).

There are wide, open roads surrounded by trees, and no traffic jams (though now the problem is increasing).

No encroachments on roads as police are strict and do not take bribes.

No slum is allowed in the city by the police (although few slums exist).

The residential sectors are well planned, clean and have more than half the area devoted to parks, and separate area for markets.

The city has smartest police of India and is safest Indian city.

The cost of living is low as compared to most big Indian cities.

For shopping, there are sector 17 and sector 34 markets and Elante Mall.

It Has lots of places to visit in the city like Sukhna lake, Rock garden, Rose garden, Valley of animals, a good museum and lot more.

Less crowded as compared to other Indian cities(though now getting crowded at a rapid pace).

There are good schools and universities (but not as good as Delhi). Due to huge amount of trees, it is a pollution free city, and thus people are healthy.
Also better power situation and water supply than Delhi.

Delhi is mostly unplanned except central Delhi and Noida (not a part of Delhi). Also, the greenery and cleanliness of Chandigarh can only be found at these two places, and few others. The remaining 70%-80% of city is dirty and has rare green cover.

Roads are wide and open(sometimes tree lined), but there are encroachments to narrow them and cause traffic jams.

Encroachments – half the roads are occupied for hawkers, parking and beggars.

Slums and poverty is common, though much less as compared to cities like Mumbai.

2o per cent of residential areas are planned. These look like Chandigarh from inside but at least ten times more expensive.

Safety – need I say anything at all for comparison?

Cost of living higher than Chandigarh ( but still rents are lower)

Infinite number of places to visit in the city, thanks to its large size. Way ahead of Chandigarh.

DTC buses and metro trains, and many other modes of public transport. Public transport is better but not as safe for women as Chandigarh.

Most Polluted city in the world, at least 100 times more polluted than Chandigarh.
For pollution, visit the Yamuna river to see the plight of Delhi.

I also prefer the slow, peaceful and comfortable life of Chandigarh to Delhi’s fast life. Street food is more or less same, as the cities have a common north Indian culture.

Hence I think Chandigarh is a lot more livable than Delhi or any other Indian City.

Why it is the right time to invest in Zirakpur, Mohali, Kharar & Derabassi?